Showing posts from December, 2006
Show All 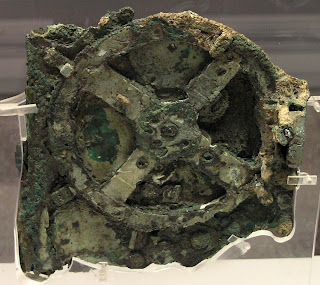 Science went back to its roots this week. Results just reported in the science journal Nature (DOI: 10.1038/nature05357 ) have focused the spotlight on several chunks of green and white metal that were found in the eastern Mediterranean in 1900.  It might not sound much to get excited about but the century-old find is forcing a drastic reassessment of ancient technology. Next to the island of Antikythera, roughly half way between Crete and the mainland of Greece, sponge divers found a Roman ship that had been transporting Greek cargo. In amongst the recovered objects were 82 fragments of bronze.  Over the years, different people have had a bash at looking at the bits and pieces but the remains continued to puzzle scientists. The British researcher De Solla Price spent much of his career from the 1950s to the 1970s trying to understand them.  He argued they were the part of a sophisticated device capable of astronomical calculations.  Not everyone was convinced. The find became
Post a Comment
Read more
More posts