Showing posts from March, 2017
Show All

Echoes of an ancient time in Australia 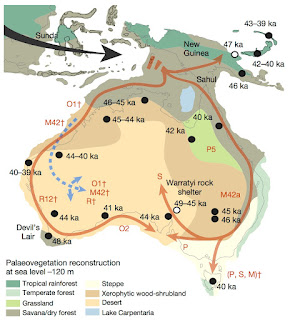 Exciting results published today in the international science journal Nature provide precious new insights into the arrival and movement of humans across Australia over a staggering 50,000 years.  Sadly, many Aboriginal Australians no longer live where their ancestors had called home. So to better understand Australia’s history before the arrival of Europeans, a forward-thinking initiative called the Aboriginal Heritage Project was set up. Led by the University of Adelaide ’s Australian Centre for Ancient DNA (ACAD ) in partnership with the South Australian Museum and Aboriginal families and communities, the team – in which I was fortunate to play a small part – have uncovered some remarkable new findings.  Headed by Alan Cooper and Ray Tobler, the ACAD group analysed over 100 hair samples collected with consent from Aboriginal people across the continent between the 1920s and 1970s.  These samples were collected as part of a project where along with hair, detailed records
Post a Comment
Read more
More posts