Showing posts from September, 2009
Show All

A warning from the north 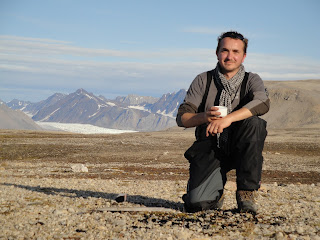 I’ve just returned from fieldwork in Svalbard, the island archipelago situated halfway between Norway and the North Pole. Straddling 81˚ to 74˚N, this near-pristine environment is a haven for researchers interested in Arctic environments.  I’ve been extremely privileged to visit some beautiful places in the world but was blown away by Svalbard. The islands are a heady mix of mountains, ice and 24-hour summer daylight that was totally different to anything I had ever experienced before. I was there as part of a University of Exeter research team to look into the impacts of past climate change, funded by the Leverhulme Trust .  For two weeks, we boated, trekked, dug and probed our way into Svalbard’s recent geological past. As the ice has retreated back from its maximum limits at the end of the last ice age, the land has risen out of the sea, exposing ancient landforms and sediments that preserve a fabulous record of what has happened in this part of the world over the past 20,000 year
Post a Comment
Read more
More posts