Showing posts from May, 2008
Show All 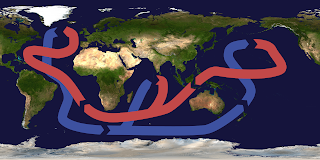 I’ve just finished reading a fascinating research paper in this weeks issue of Nature .  Researchers in Germany, headed up by Noel Keenlyside of the Leibniz Institute of Marine Sciences, have looked at the importance of circulating water in the North Atlantic on global temperatures .  By running a climate model that included the natural rhythm of the ocean they’ve investigated what might happen to future temperatures. What they found demonstrates once again just how important natural climate variability is in the debate about global warming.  Before we look at the new results we need to understand how ocean circulation has an influence on the world’s temperature. The global conveyor belt When travelling around Britain you’ll often read tourist brochures waxing lyrically about the virtues of the Gulf Stream and why it makes the western coastal resorts so unusually warm for their latitude. Usually there’s a picture of something that’s mistakenly described as palm tree with
Post a Comment
Read more
More posts